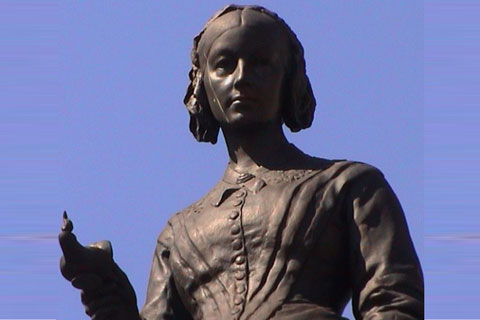 In most Chinese and Western medical schools, there are often some iconic medical figures sculptures, which can be used as image representatives, and can inherit their thoughts. It has a great impetus to the medical cause.

In most Chinese and Western medical schools, there are often some iconic medical figures sculptures, which can be used as image representatives, and can inherit their thoughts. It has a great impetus to the medical cause. There are four ancient famous doctor sculptures. The sculptures of Hippocrates in the West and the Nightingale sculptures in the nursing world are diverse in style. The characters are mainly composed of avatar sculptures, bust sculptures and whole body sculptures. They are made of cast bronze sculptures and cast iron sculptures. Today, Introducing the celebrity sculpture Nightingale in the medical nursing industry, which is also a well-known Western figure sculpture, with a distinctive character image and unique Western classical characters.

Nightingale grew up in the war. She was a British nurse and statistician. She was born in a British high society in Italy and has a superior living environment. However, she still pursues her ideals and wishes and devoted herself to the nursing industry. Due to Nightingale’s efforts, the nurses whose status has been extremely low, the social status and image have been greatly improved and become a symbol of lofty. And “Ningdinger” has become synonymous with the spirit of nurses, thus creating a career in nursing. The establishment of the Nandinger sculpture of the medical school is not only a commemoration of the great figure, but also a spiritual encouragement and encouragement. It also has a profound educational significance. At the same time, it can also enhance the quality of the medical school and clearly reflect the theme of the medical school.

In the course of human history, there are countless medical figures who have dedicated their life experiences to the medical cause. Nowadays, medical sculpture has become a popular and important part of the sculpture industry. Through these medical figures, we can also From the understanding of a period of history, a deeper understanding of the deeds and achievements of his characters, so the establishment of medical sculpture has a very important practical significance.